My love for the Snyder written Batman is insane- i don’t think I’ve liked another writer on this book this much ever.  Alot of that has to do with how well Bruce is written by Snyder, and that amazing Court of Owls start.  So to say that I’m excited to see how he handles the ‘First moment’ of Bruce becoming Batman would be an understatement.

If you buy this book for no other reason this week (Capullo draws that bat brilliantly by the way) you should by it simple to see how the New 52 first batman moment goes.  Its gonna be history defining- at least for the comic community. 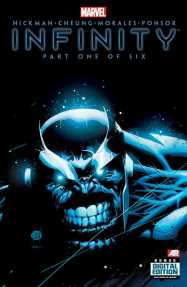 So this is the start of Marvel’s big summer Event-  yes they do them seasonally now. And while it may have a bigger price tag than usual it does give you nearly twice the regular page count, coming in at 55 pages.

Jonathan Hickman has been building to this in his Avengers run, and im excited to see where it goes. This issue promises the outbreak of war on both Earth and in Space, so expect alot of characters to appear straight off- but Hickman works very well with big casts so i wouldn’t worry about that format causing script issues.

Did i mention the Return of THANOS?! Because that alone is a reason to buy this book- who doesn’t love to see Thanos destroy everything he can possible interact with. And with Cheung providing the pencils it should look stellar. 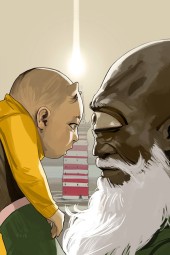 Finally- its been four months since this book last hit the shelves- and boy have i missed it. Alana and Marko have already become great favorites of mine, not too mention little Hazel. Brian Vaughan has done an amazing job with this book so far, the story is intriguing and original while the dialogue is as engaging as each and every character. Which is why I’m hoping to see more of D.Oswald Heist after his appearance at the end of the last issue- left me excited to see what he can offer to the story.

But I’ve also missed the look of this book, it looks like nothing else out their at all. Each page truly is a work of art to behold- i especially like that Fiona Staples uses her own handwriting for Hazels notes.  But i think for me the art is one of the reasons this all works- i really couldn’t imagine seeing this drawn by any one else- and that says wonders for the job Staples is doing here.