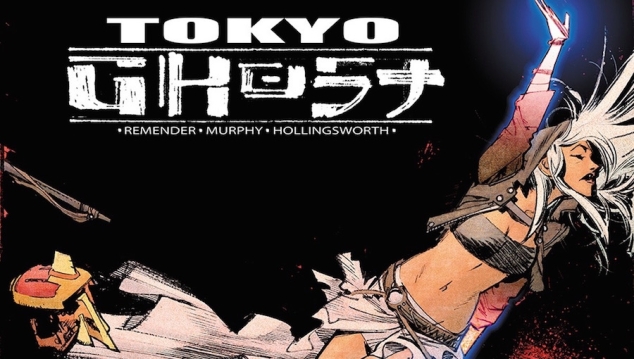 Tokyo Ghost came to a brilliant end last week, at only 10issues too but this comic book written by Rick Remender featuring art from Sean Murphy is one of the best science fiction books of the last few years and deserves your time. Now let me explain why to you….

This book is a science fiction title set in 2089 where humanity has become addicted to technology and entertainment and as a result caused many of the worlds natural areas to waste and perish away leaving mega cities as the only places that can house humanities ever growing population. The story focuses around Constable Debbie Decay and Led Dent who are sent on a mission to the worlds only non-technology driven city of Tokyo.

As with any Sci-Fi the world that the story takes place in key, and Remender and Murphy have created a wonderful dystopia future that feels legitimate and looks wonderful. One of the big draws of this world is that it doesn’t feel like to big a leap from where current generations are- lets be honest who isn’t hooked on some kind of technology and with VR making its way into peoples homes it may only be a matter of time before that the only way we consume material. It’s this link to current culture and technology that makes this book hit home as you truly get a sense that this could very well be were our futures are heading and that’s a very scary thought in deed.

Yet just as appealing as the very nature of the world created are the visuals that Sean Murphy has used- as the big concrete cities look like towering cesspit filled areas of mass depravity and dilapidation while at the same time managing to look ram-packed full of technology and this mix is a real wonder to see. however its when the main characters arrive in the land of Tokyo that the modern world fades into obscurity compared to the lavish lands and greens of the old natural world where the interiors come into their own.

However no imaginary or constructed world is complete without character and while the main cast of this title is short- there’s really only 3characters that matter- and the length of its run can be considered short there development is very well handled. All of the characters including the villain get a nice section of the story explaining their backstories and their links to each other while the story revolves around them and how they feel towards the world and are either made or broken by the state of technology. Without giving too much of the story away the book does a great job of keeping the characters true to themselves before finally giving the heroes of the piece an ultimate choice to make about who and what they wish to be! Remender does an amazing job on the story throughout at keeping everyone engaged and keeping the story on track- but some of the best bits are easily the scenes featuring Davey Trauma (the bad guy of the piece) and his virtual reality conversations with villains from the past or his diabolical rants at Deb. Everything in this book featuring Davey is just absurdly brilliant and evil, and at times I almost felt myself liking him a little too much considering he is the antagonist of the piece.

This book also showcases the action scenes brilliantly wether these are bike chases, sword fights. shoot outs or sometimes a combination of the three its these large spread pages and panels that bring Murphy’s artwork to life and help make each and every scene feel important and pivotal to the story.

Overall this book has everything you could want from a science fiction book- not too mention a comic book and should be on your reading list if you haven’t already read it. I can’t recommend this enough.