Extreme Rules takes place tonight and is unlike any other WWE PPV because all the matches have an extreme stipulation and could all very lead to blood- even if current programming doesn’t allow it. So let’s take a look at the card and my predictions for each match.

New Day Vs Cesaro & Kidd
This match seems to have come around from nowhere, I was expecting New Days place to be filled by Lucha Dragons, but with a single win mover the team it appears Xavier Woods and company get the shot at gold. Despite the recent heelish turn to the very stale New Day act, the crowd are still booing them out of buildings as there is no reason to get behind this team, opposed to the creative and technically sound team of Cesaro & Kidd that everyone loves. I could see WWE switching the gold here, but with the Uso’s out of action maybe well get a face turn for the champions instead as crowds love them. Cesaro & Kidd have to retain as a switch here makes no sense, putting the gold on a dying act and devaluing a popular team won’t work.
Winners: Cesaro & Kidd

Dean Ambrose Vs Luke Harper
Dean Ambrose has a shocking PPV win rate- he’s lost everything since the SHIELD split but with Luke Harper being the most under utilized talent on the roster (now Cesaro has a spot and gold) his luck could change today. Ambrose was in the ring to help out former ally Reigns on Smackdown and a triple threat for the WWE Championship seems like logical booking at some point in the next 12months, but for that to happen Ambrose has to build steam and a win over the man who he’s been brawling with for months would surely help that (as would a money in the bank win soon) Harper has looked like a true threat on the main shows recently, so taking g a loss wouldn’t harm him anymore than the WWE already have but does help build Ambrose.
Winner: Dean Ambrose

Naomi Vs Nikki Bella
This match has had an odd build, we’ve seen Naomi beat Nikki twice then lose to Paige in a number1 contenders battle royals only to beat Paige out of action and get her title shot. Yes apparently now incapacitating the number1 contender will get you their title shot more than beating the champion somehow. However odd booking aside, Naomi has looked better in 2weeks as a heel than in months accompanying the Uso’s and being mainly forgotten. Nikki has held the gold for 5months and most of the talk about her reign is of the contenders, and that the reason we see a switch of the top diva here today.
Winner: And new Diva’s Champion Naomi

Daniel Bryan Vs Bad News Barrett
If this match takes place anything could happen, given the rumours surrounding the injury I rehabilitation state of Bryan. I’m enjoying Bryan as the face of Smackdown and think he could bring some credibility to the title, and we’ve seen how the WWE mishandled Barrett’s last reign so this one is an odd one. If Bryan is injured but can go I see him retaining here and dropping it next month if his health doesn’t improve to someone like Ambrose or Sheamus.
Winner: Bryan if the match happens 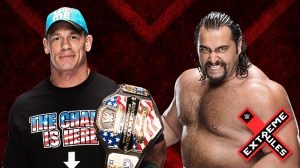 This is an odd match to call as all of the recent booking made Cena the man to beat Rusev but has also helped jeep Rusev dominant and strong. The WWE however are clearly keen on Cena as the US Champion, and I don’t see that long-term plan of him giving others a rub in the open challenge ending here, but it would also surprise me to see Rusev lose clean twice in a row to Cena as he’s been such a big deal for the last 12months. Due to this I see a screwy finish that allows Cena to leave with the belt some how.
Winner: Cena retains in some screwy fashion

Dolph Ziggler Vs Sheamus
This match has some decent build, but a Kiss my Arse match is not interesting television. Despite this Sheamus has been great since his return and Ziggler is always great so the potential is there for these two to have a good match- especially as Zigglers athletic style should clash well with Sheamus’s brawling. The WWE seem to need big heels right now, so I see Sheamus rolling on here and moving along to a new feud; possible with Neville? This seems like its Sheamus’s time so expect him to score the win here somehow.
Winner: Sheamus

Roman Reigns Vs Big Show
I have to admit I have more faith in Reigns now than I did in January as two great PPV matches (not necessarily due to him) have raised his stock in my eyes, but this feud with the Big Show doesn’t seem like it should have come next. Its meandered along and delivered nothing of note and has a performer near the top of the card who should be on his way out. This last man standing match will give both guys a chance to unleash a brawl and the big power moves, but the inability of Big Show to sell moves and Reigns limited moveset could really cause this to suffer. I’m not expecting much here though so maybe it will surprise.
Winner: Reigns moves forward

This feud has been well-built, and given the amazing match that the two put on at WrestleMania it make perfect sense to go back to it now Rollins has the gold. Having the RKO banned and the steel cage give the match and anything can happen feel, which helps to add to the excitement, however it seems too early in the great run of Rollins for him to lose the gold here- and putting the title back on Orton does nothing for him or the company. That said i see Kane playing in the finish, somehow- otherwise why add him to the mix? However Rollins walks, or is carried out as the WWE world Heavyweight Champion at the end of the night.