Wednesday is nearly upon us, and that can mean only one really good thing; It’s New Comic Book Day! This weeks doesn’t see a sleuth of new titles, but does still see some great titles getting their release. so let’s get straight into what I think are the most exciting books of the week.

Official Synopsis: THE CLIMACTIC CONCLUSION TO SPIDER-VERSE! The Prophecy is coming to fruition but Superior Spider-Man has something up his sleeve.

Why its a Pick: Spider-Verse has been amazing and has had some really great moments and we have had the pleasure of seeing a while new host of spider-men. Slott has also weaved a tale that really does feel like its going to change the fate of all of the spiders going forward- as the ‘Inheritors’ have been a real threat for each and every Spider-Man so seeing how this ends; and more importantly who lives and who dies is top priority for me this week. Expect this to be shocking and exciting but most of all to change the lives of all the Spiders involved. 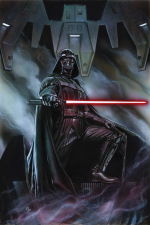 Official Synopsis: The original Dark Lord of the Sith stars in his first ongoing series!
Ever since Darth Vader made his first on-screen appearance, he became the one of the most popular villains to ever haunt an audience’s dreams! Now, follow Vader straight from the ending of A NEW HOPE (and the pages of the new STAR WARS comic book) into his own series, showing the Empire’s war with the Rebel Alliance from the other side! Writer Kieron Gillen (Uncanny X-Men, Journey Into Mystery, Iron Man) and artist Salvador Larroca (Invincible Iron Man, X-Men: No More Humans) bring us a peek behind the mask of evil!

Why its a Pick: Marvel has done such a good hob with the first two issues of Star Wars, that i have really high hopes for this book, and when you add to that the fact that Vader as a character is a hugely popular and multilayered villain there is no reason not to be excited by this book. I’ve always felt like books based purely around Sith provide the better action, maybe its the darker tone but this is one that should definitely be exciting. 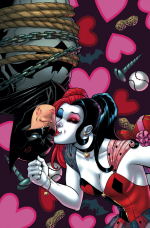 Official Synopsis: Love is in the air in New York City! The planet’s richest bachelor, Bruce Wayne, is in town for a charity auction – and the highest bidder gets a date with Mr. Tall, Dark, and Brooding! Good thing Harley Quinn just came into some money (please, whatever you do, don’t ask how). But can Bruce really spend a night with Harley without her learning how he spends his nights?

Why its a Pick: Harley Quinn is an amazing character, so seeing her getting a full date night with Bruce Wayne sounds like oodles of fun to me; and what is Harley Quinn if not fun at her best. This book should be a little bit of light relief and provide some great comedy moments, plus the potential for a Bruce Wayne and Joker moment has me excited- we all know ‘Mr J’ doesnt like Harley seeing other men!

Spider-Verse has been to good, too big and too eventful for anything to knock it off the top spot in the week that it delivers the final chapter. This book should be massive, and should be the first thing you read this week my fellow web-heads.