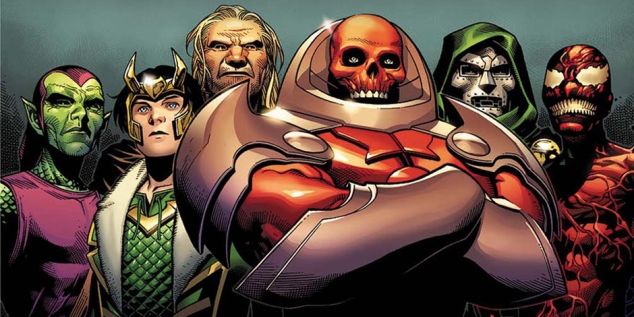 This weeks recommendation is a short event series from Marvel comics, that is still currently running with a single issue left to make the stands and as such is a first for me as I’ve never recommended a mini-series that is still running. However this series so far has been one hell of a read and looks like it could really leave lasting ramifications on the Marvel universe.

This mini-series has been written by Rick Remender, and has been very closely tied to the events of his monthly book ‘Uncanny Avengers’ which has clearly helped this book giving it the feeling that these massive events have been brewing within the Marvel universe for a long time making them all the more meaningful. The event has closely followed the Red Skull and his gathering of the telepathic powers of Charles Xavier- gained from raiding his corpse- and how he has used these to establish a mutant prison on Genosha to rid the world of all mutants.

Red Skull has been a real constant for Remender with his books, and its nice to see him positioned as the big villain in the first arc of this story, as he has been so well-built up as a threat that this needed a big pay off and boy has Remender and Marvel delivered. This all began with Magneto returning to his villainous routes and murdering the Red Skull for what he has done to the mutant population and mainly for his desecration of the remains of Charles, however in this act of vengeance he unleash the Red Onslaught (Think Onslaught but with Red Skulls ideals) and a whole host of power to fully achieve his aims. Jim Cheung had artistic duties on the first arc and did an amazing job of making Red Onslaught look as dominating and genuinely powerful as he sounded, and some of the double splash pages showing the battle with a host of superheroes were superb.

In trying to stop the Red Onslaught the Marvel universe had to draft in the whole of the Avengers, X-Men, Uncanny Avengers and any other superhero on the face of the planet all to no avail. However this is where the story plot gets totally exciting- it took the magic of Dr Strange, Scarlet Witch and Dr Doom to stop the Onslaught using an ‘Axis’ flip. The aim was to try to get Charles personality to come to the front, but what we got was much better.

I’m a huge fan of Charles Xavier- and have always loved his holier than tho approach while secretly hiding darkness and would have been happy to see him brought back, however Remender has given us something more exciting and something fresh. He has managed to switch the personalities of every hero and villain that was there at the time of the final battle- to truly give us new takes on our favourite characters.

We now have the X-Men as villains who have given up on their goal of peaceful co-existence and have instead decided to gen bomb the whole of the USA to eradicate all non-muntants. Seeing them led by Apocalypse (formally Evan) and happily joining his cause by attacking humans and setting their base as the centre of New York has been fun and exciting, and appears that it could very well be the next logical step for characters such as Cyclops. Weve also got to see the New Captain America (Sam Wilson) being brash and egotistical telling everyone their beneath him and hunting all those who disagree with his agenda to be a world leader, while Iron Man is giving away technology that allows its users to change their appearance to their ideal all for a small cost- and a huge profit for the former hero. Seeing him go face to face with Daredevil as this is causing crime is great, and again something totally new.

This is where this series has flourished, in the second arc many of the characters have become much more exciting than they’ve been in years, and this is a real positive. Seeing Carnage as a hero and complimenting Spider-man has also been a huge moment of both comedy and excitement, not to mention Sabretooth agreeing with Wolverines ideals and fighting for his cause- this book has given us new approach after new approach.

The real question here is how much of this will be returned to normal in the final issue, but hopefully either way there will be some major lasting effects to the Marvel universe and some new and exciting changes going forward. This could be the start to a host of new teams, villains and writing opportunities that you shouldnt miss the potential start of.