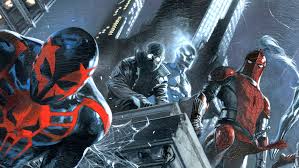 This weeks recommendation is unusual, mainly because it’s for a limited series that is only half way through and doesn’t really even contain the conclusion to the story- but never the less this series has been great and truly deserves to be read. Obviously im talking about ‘Edge of Spiderverse.’

The premise behind Edge of Spider-Verse is simple yet brilliant- what if in a host of different universes hundreds of other individuals (some Peter Parker some not) were bitten by radioactive spiders and became Spider-Man? And what would happen if a villain Spider-Man, our friendly neighbourhood one, hasnt seen in the last ten years had his family hunt them all done and eradicate them- well this is what Spider-Verse is going to tell us but before this we have Edge of Spider-Verse to introduce us to some of the unlikely and bizarre heroes were going to see in this storyline.

So far Spiderverse has given us a host of different artists and different writers all tackling and introducing different version of out favourite hero (these can be seen here) but the best of the bunch has easily been ‘Spider-Gwen’ where in an alternate reality Gwen Stacy was the one bitten by the radioactive spider and given the powers of Spider-Man.

The stories have all been well written and done a great job of introducing the Spider-People were going to meet in the main story, but at the same time have given us a good glimpse of why the death of every spider in the universe is not only a danger to them but also to the entire fabric of the universe and has helped to explain the long running ‘Web of time and universes’, that Madam Web has so often warned Spider-Man about being broken, and why this is so important to the every Spider powered individual out there.

The artwork has also been great, ill admit its been nice to see some fresh artists in the talent pool at Marvel get to tackle these characters and give them a unique costume and feel- and this has clearly been working for fans too as Spider-Gwen has had her own series announced at this weekends NYCC 2014.

Marvel has produced the most exciting prelude stories ive read in a long time with ‘Edge of Spider-Verse’ and this is only a good sign of things to come in Spider-verse, so I can only recommend that you get on board now before you miss this event and regret it.