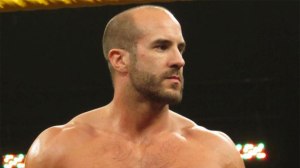 WWE has a lot of talent in their roster, both the main roster and NXT, but right now it’s not fully utilised. The man who may be faring the worst right now is Cesaro, a man with great talent but seemingly no spot to use it.

Cesaro should be a true main event star right now within the WWE and their current product especially given his strength, technical ability and impressive move set. However right now he seems to be floating around as a man with enough credibility to lose to others and in the process make them look more impressive.
But before we look at where Cesaro is now, let’s look back over his WWE career to date for a real picture of how badly they have squandered his talents upto now.

Cesaro joined the WWE in 2011, after spending huge chunks of his previous 11years wrestling in ROH, and Japan under his real name Claudio Castagnoli where amongst other accolades his was the ROH longest reigning tag team champion (364days with Chris Hero) and had wins of top in dependant talent like Bryan Danielson and Austin Ares. Cesaro was sent to Florida Championship Wrestling in 2011 under a WWE developmental deal. After 12months there Cesaro finally debuted on April 20th 2012 but made his in ring debut the week later defeating Tyson Kidd. Cesaro was supposedly a former Swiss Military soldier who went into professional rugby but got disbarred for being too violent- yes that’s the character he was given! Despite this he managed to make it work through solid in ring work and captured the US Title within 4months of his televised debut, but this is where things begin to fall apart slowly.

Cesaro managed to hold the US title for 8months, a pretty impressive span however during this time he spent most of it trading wins and loses with his next title challengers. What’s worse than the way Cesaro was booked is who he had clean loses too- Great Khali, Justin Gabriel, R-Truth and even Santino Marella. Granted these we’re slightly higher up the card in 2012- but to have the talented Cesaro in programmes with these guys loosing clean wasn’t the best use of either him or the US Title. Cesaro was given moments to shine during these points, and he did agaisnt Christian, Wade Barrett and Adrian Neville only helping to prove he needed to be higher up the card.
Cesaro then feuded with Sami Zayn in NXT for several months, and produced some of the best technical matches of the last 5years- that were and still are a real treat see. Once again Cesaro was showing the WWE just what he was capable of producing and it looked like he could be set for a return to the main roster in a big way.

However an alliance with Zeb Colter and Jack Swagger as ‘The Real Americans’ didn’t pan out that way. With his first PPV appearance alongside Zeb Colter being the Money in the Bank match it looked like Cesaro could not only be able to shine, but also walk away from the PPV with a huge future opportunity at the WWE world title. However once again, despite a good showing in the match it wasn’t to be as Damien Sandow won the briefcase, and we all know how that’s panned out for both him and the company.
The Real Americans continued there run as a team, and two of the most under utilised talents on the roster all the way to 2014’s ‘Elimination Chamber’ PPV, having list to almost everyone on every major pay per view event including the Prime Time Players, Marella and the Great Khali and Los Matadors. However despite the continual loses Cesaro and Swagger showed the power, intensity and technical ability of stars it’s a shame they were never booked as so. During the early part of 2014 Cesaro was given some singles time in the ring, and really began to shine managing to secure a ‘clean’ singles win over WWE World Heavyweight Champion Randy Orton to secure the spot in the Elimination Chamber main event. It looked like Cesaro was set for the main event spot he’d deserved in WWE, and this was re-enforced when he and Sami Zayn met once more on the live NXT debut ‘NXT Arrival’ putting on a superb action filled spectacle.

Watching this match any doubts over whether Cesaro is technically gifted enough or can deliver in the ring should have faded away within the WWE as both men looked like the could easily main event a PPV and get the crowd in a frenzy with their characters and ring work.
Luckily for Cesaro this carried over into the ‘Elimination Chamber’ as he had a strong showing in the main event- and was booked as a true European wrestler with his trademark technical moves and upper cuts that look brutal. He was the third entrant eliminated but looked strong even in submission to John Cena.

Cesaro maintained this momentum going into WrestleMania XXX, delivering some great performances on Raw and Smackdown that seemed to re-invigorate him with the masses- this may be due to the showcasing of the ‘Cesaro swing’ which a real treat to behold.
However when the WrestleMania card was filled there appeared to be no spot for Cesaro, he had no match and wasn’t even in the ‘Andre the Giant memorial battle royal.’ However on the pre-show the Real Americans imploded after a loss, and Swagger assaulting Cesaro before falling victim to the Cesaro swing- the crowd loved this moment and it truly felt like a new singles star had been firmly established with Cesaro. This was only to be confirmed later in the evening as Cesaro was a surprise entrant in the ‘Andre the Giant’ battle royal and not only own but power slammed the Big Show over the top rope in a truly memorable WrestleMania moment. This truly was the cementing of Cesaro as a top singles star with a huge accolade on his side- the first winner of this amazing match. What could possibly go wrong?

On the following Raw Cesaro’s win was endorsed by Hulk Hogan and he announced he was a Paul Heyman guy- everything looked set for a huge boom. But in the coming weeks things would change both in the WWE and for Cesaro specifically, with the Injury to Daniel Bryan and the break-up of the SHIELD. With Bryan injured and the SHIELD split Cesaro managed to secure a spot in the Money In the Bank match for the vacant WWE World Heavyweight Title on the back of more impressive ring work. However Cesaro never felt like the big star he could have, as Heyman was constantly referring to the ‘conquering of the streak’ and ‘Brock Lesnar’ while with Cesaro managing to devalue his present client in favour of the Beast. Cesaro was merely made to feel second-rate when Heyman cut promo’s, and was given no time to speak for himself to solve this. Luckily his ring work in feuds with Jack Swagger and Sheamus allowed him to still deliver great in ring work leading up to the Money in the Bank match.

Ultimately Cesaro came up short at Money in the Bank, with everyone’s expected winner John Cena, walking with the gold. And at this point everything returns to the regular misuse of Cesaro.
Since Money in the Bank Cesaro has been totally directionless, he’s lost to Kofi Kingston in a commercial break ( yes that did happen), been eliminated from the Intercontinental title battle royal by Heath Slater and lost consistently on TV to put over other stars such as Big E, Dean Ambrose and Jack Swagger in PPV build up matches. As SummerSlam arrives this weekend Cesaro isn’t even on the card-  a huge fall from the WrestleMania success. But why?

It appears the WWE has very little faith in Cesaro on the microphone cutting promos, as in the last 2years he has alwyas had a mouthpiece/manager that does all of the promo work for him. When allowed to cut promos on his own he does seem more than capable but does require some work to be up there with the best of today. This is evidenced even more recently as cesaro has recently split from Paul Heyman, and within two weeks was looking to be managed by the authority- could this be more proof that one of Cesaro’s issues is his mic work? However lets look at Roman Reigns, he’s currently in line for the biggest push on the roster and many see him winning the WWE World Heavyweight Title at WrestleMania next year but his mic work is really in need of improvement. He struggles with delivery and seems nothing if not short and uninterested on the mic.

Okay i mentioned Roman Reigns, so let’s get tis out of the way- reports suggest that Cesaro’s push got derailed due to the breakup of the SHIELD and the WWE’s desire to push Reigns, feeling that two push for younger stars at the same time would be counter productive. However Cesaro had the same level of fan support (minus the screaming girls portion maybe of Reigns) prior to his cool down after WrestleMania, he’s more capable within the ring than Reigns is with his limited moveset and can deliver a much better looking match. Dont believe me go and look at Reigns and Randy Orton from Smackdown on the 1st August, Reigns looks bored and uninterested while trying to sell Ortons second rope DDT something you never see from Cesaro. So how can a guy who has less mic skills and in ring skills be pushed higher up the card when hes cleare not ready for the spot- does it all simply boil down to the fact that he looks more like a WWE champion than Cesaro does? I really hope not.

Cesaro however isnt yet doomed to the undercard, like the afore-mentioned Damien Sandow, and can be saved as he has still been given opportunities to shine (Raw Vs John Cena on July 27) and can still move forward post SummerSlam if he’s given the right fued and booked like the talented star he truly is. So im hoping for now that the WWE’s plan, build him up again post SummerSlam and get him back to where he was as the ‘King of Swing’ just before WrestleMania.

Until then however Cesaro will have to lurk in the waters of ‘wasted talent’ that the WWE have on their main roster alongside the likes of Bray Wyatt (after back-back-back loses to Cena have derailed all momentum), Dolph Ziggler who gets pushed squashed too often and too fast and Jack Swagger who still appears to be paying for an illegal mistake. All I can hope is that the WWE see the talent that’s in Cesaro right now and get him where he need to be for the sake of their programming and the WWE universe and get everyone back into the swing.