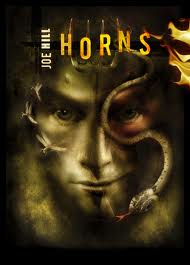 Horns got its first mini trailer just before Comic-Con this week, and that was a decent little trailer that highlighted everything it needed too for fans of the book, but today theres a bigger and better one here.

Horns is based on the novel of the same name by Joe Hill, and tells the tale of Ignatious “Ig” Perrish who wakes up one morning after a drunken night (in the woods containing an old foundry, near where his girlfriend’s corpse was discovered) to find that he has sprouted bony, sensitive horns from his temples. Ig is the second son of a renowned musician and the younger brother of a rising late-night TV star, Terry Perrish. Within his hometown of Gideon, New Hampshire, Ig had position and security, but the rape and murder of his girlfriend, Merrin Williams, changed all that. Though he was neither charged nor tried (nor had committed the crime), Ig is largely considered guilty in public opinion.

The film stars Daniel Radcliffe as IG and is directed by Alexandre Aja and is set to be released this Halloween.

One thought on “Horns get a longer trailer”