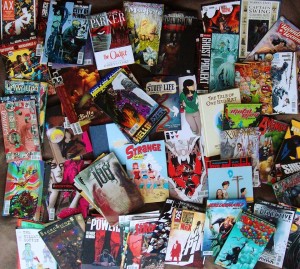 The new comic book release for the week arrive tomorrow, and that has to be a real highpoint in the middle of the week. But with the amount of ongoing titles and new series released each week staying on top of whats worth reading or checking out can be a difficult process- so with that in mind here are my top three books of the week.

As defenders of the cosmos go, Rocket Raccoon has faced his fair share of galactic battles. He’s been a hero to the weak, a champion of good, a protector of the innocent, a heartthrob to the many intergalactic female species and now–a raccoon on the run?! ( I’m sorry, I’m sorry, a “formidable-and-expert-Guardian” on the run. Rocket is NOT a raccoon, okay?) Rocket’s high-flying life of adventure and heroism may soon be a thing of the past when he becomes a wanted man—and the authorities are not the only one on his TAIL! (We’ll definitely be overusing that pun!)
Superstar creator Skottie Young brings his A-game as writer and artist on the series we’ve been waiting decades for. Because let’s be real, this is the only Guardian of the Galaxy you actually care about. Am I right?

There are two big reasons that this book is one of the most anticipated releases of the month, not just this week and that’s Rocket Raccoon and Skottie Young. Everything Skottie Young (one of my favourites) touches from an art point is amazing and sells out in time atall- just look at the limited variant covers he produces for everything and the prices they fetch, but more importantly you know your going to get a very distinctive looking book from Young that will draw people in and make them want more. Add to that the huge popularity of Rocket Raccoon, and his completely addictive personality- and im sure some great writing from Young- and you have a book that is destined for success, especially around the time of the ‘Guardians of the Galaxy’ movie launch where people will be looking for material to read prior to the film. This book should be a great action piece that features some of the best visuals in the business- why wouldn’t you but this.

Journey back to the heady days of the 1990s, when two characters debuted who would change the face of comics…Cable & Deadpool!
In this all-new tale, we learn of the pair’s first meeting, well before New Mutants #98, as Cable and his soon-to-be X-Force race through the timestream to stop the reckless mercenary Deadpool before he destroys American history for good!

Well it features one of Marvels hottest properties in the form of Deadpool, but not only that it throws him back to the 1990’s Rob Liefeld time to take on the very first X-Force team. If the premise of seeing the old-school X-Force team isn’t enough for you, then im not sure what you want from your mutant based and action packed comic books as this should be a real great series full of 4th wall breaking humour and huge action spread across multiple panels. And when you consider this is being written by Duane Swierczynski, who always handles Cable stories in a great logical way, despite the whole time travel issues, he manages to tie everything together and tell a coherent and massively enjoyable tale so expect nothing less here.

The bargain-priced debut issues of the beloved series continue here with this dollar comic presenting “The Haunting of Keyhouse,” the first chapter of Crown of Shadows, the haunting third storyline in the Locke & Key saga!

This isn’t technically a new release, as the whole Locke and Key saga has finished in a great way, but for those who never jumped on the band wagon or just want to try a single issue of the story before diving into the back issues or the tradepaper backs this is a great way to do so for less than a £1. You can’t argue with a quality story form Joe Hill for that price.

PICK of the WEEK

Skottie Young and Rocket Raccoon are too bit a team to overlook this week- and I couldnt be more excited.